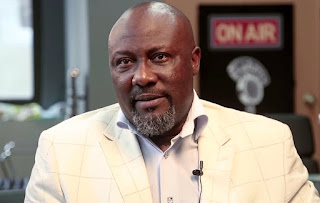 The certificate scandal involving embattled Senator Dino Melaye representing Kogi State may just have been put to rest after the Vice Chancellor of the Ahmadu Bello University Professor Ibrahim Garba confirmed that the senator actually graduated from the university.

The VC who was summoned before the House Committee on Ethics replied in the affirmative when asked by the house if Melaye actually graduated from the University.

"Yes. From records, Dino formerly known as Daniel Jonah Melaye graduated from ABU with a BA in Geography," the VC of Ahmad Bello University said.

To serve as clarity, the Senator said he officially changed his name from Daniel Melaye to Dino Melaye and he is ready to tender the affidavit. He also admitted under oath that he graduated from the university.

Recall that on Monday, March 20, 2017, Sahara Reporters made a damning report when it alleged that in a tweet that Melaye did not graduate from ABU for his first degree, against his claim that he studied and graduated with a degree in Geography.

The online news platform also purported that hot headed politician, who is the Chairman, Senate Committee on Federal Capital Territory, forged his transcript with the assistance of his head of department whom he bribed.

In the heat of the certificate scandal, Melaye noted that since he graduated from the ABU, Zaria in the nineties he has obtained six more degrees and is presently in the process of acquiring another degree when most of his qualifications are actually certificates. 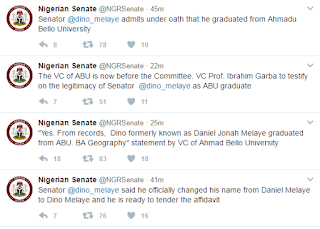