#BBNaija: How the votes swayed the tide in favour of Efe 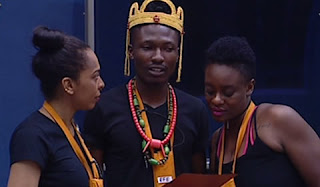 The Big Brother Naija reality TV show staged in South Africa has come and gone leaving unforgettable memories and controversies in the minds of many followers and fans who watched the 11-week contest.

As expected, fans favourite Efe Ejeba emerged the winner of the second edition of the reality TV show and the votes showed how the watching audience swayed the tide in favour of the Delta State born burgeoning rapper.

Efe secured 57.61 per cent of votes beating Bisola, who became the 1st runner up with 18.54 per cent of the votes at the grand finale to emerge the eventual winner of the show.

Tboss scored 13.60 per cent to emerge the 2nd runner up; Debie-Rise with 8.78 per cent of votes emerged 3rd runner up while Marvis scored 1.47 per cent to complete the voting process.

The tension and suspense filled grand-finale hosted by Ebuka Obi-Uchendu and co-hosted in Lagos, Nigeria by the maiden winner of the Big Brother Naija show, Katung Aduwak witnessed initial performances by 2face Idibia and Tiwa Savage which was later followed by two heart wrenching evictions.

Marvis, the tomboy basketball loving female and Mass Communication graduate from Madonna University emerged the first housemate to be evicted from the house on the night followed by guitar clutching Debbie-Rise.

That left the trio of Efe, Bisola and Tboss all in the running to emerge winner of the eleven week contest that started with nine other housemates including; Uriel, Kemen, CocoIce, Bally, Marvis, ThinTallTony, Gifty, Soma and Miyonse.

Then, the suspense and tension jerked up to another level when Ebuka, the host came into the house to annonce the next eviction and to the suprise of many, it turned out to be one of the fans favorite Tboss leaving Bisola and Efe in the race become the next winner of the reality TV show.

Ebuka later invited Efe and Bisola onto the live stage of the reality TV show filled wth roaring fans rooting for the final two contestants who were both up to win the coveted prize of N25 million cash prize and a brand-new Kia Sorento SUV.

Waiting on the stage for the result of the winner which was presented by a representative from accounting firm Deloitte, was Ebuka and when he received the envelope with name of the winner, tension filled the air but he later announced the winner of the reality who turned out to be Efe to the delight of many.
Posted by Unknown at 8:41 AM