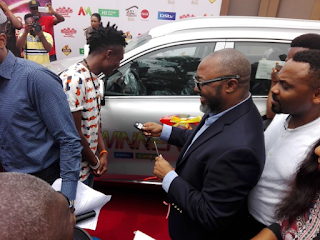 Scores of fans and followers of the Delta State born burgeoning rapper thronged the Muritala Muhammed Airport in Lagos to welcome the Economics graduate who beat 11 other housemates to the grand prize of N25 million and KIA Sorrento SUV.

After receiving his N25 million cheque at the grand finale of the show, Efe received his car gift on arrival bu that was after addressing a press conference at the Wheatbaker Hotel, Ikoyi in Lagos.

In his comments while addressing the press, Efe said; “This has been a real ride for me. I thank God that he saw me through. I started the race just being my normal self and I made sure I kept that up. I don’t want to say that it was by my own doing because only God chooses who will excel.”

The rapper who initially decided to move to Lagos to pursue his music career because it is “where it all happens’’ also thanked the sponsors of the show for their effort.

“All thanks to MultiChoice for deciding to host the show again and also for raising the bar with N25m and a jeep. I also thank Payporte for their support; they have always kept us looking fresh in the house,” he added.

Efe also gave a hint that he is ready to concentrate on music now that the reality TV show has ended and ‘based on logistics’, YBNL rapper, Olamide has already pledged to support his musical career.