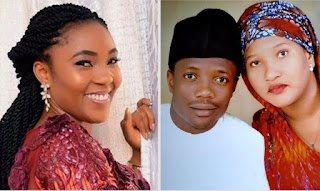 It is no news that Super Eagles and Leicester city winger Ahmed Musa has parted ways with his wife Jamila after he got into a heated argument with her when he shared a photo of his girlfriend and soon-to-be wife, Juliet on social media, calling her his Queen.

Information reaching us reveals that the couple decided to part ways due to irreconcilable differences, after Musa’s wife refused her husband’s decision to take a second wife which his religion permits.

According to family sources, Jamila kicked against Musa’s decision to marry his new lover identified as Ejue Juliet Adeh who hails from Cross River, even as the ex-Kano Pillars striker has gone ahead to formalise his union with her after staging an introduction at her family home where he paid her bride price.

“Ahmed loves his wife and would have loved to keep the union especially for the sake of their two children. He did everything to make Jamila see reason with him but the woman rejected all overtures,” a family source said.

The source also confirmed Musa’s recent arrest by the UK police, claiming that the incident was as a result of altercations with his wife that were non-physical which arose when he posted pictures of his new wife on Instagram.

Musa has officially divorced Jamila (who is refusing to seek legal redress over her divorce) and she is back in Kano state with their two children and as compensation, the footballer gave her one of his houses in Kano as well as a recent Honda car.
Posted by Unknown at 9:13 AM