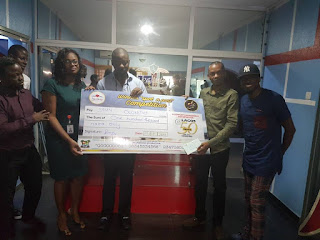 A winner has emerged in the Spot N Post campaign, a private engagement initiative to celebrate Lagos @50 organised by Abelinis Limited, a Lagos-based experiential company.


The campaign, which started early May, required Lagosians to spot a car branded in the colours of the Lagos @50 festivities, take a picture with it and post on social media. The respondent with the highest number of likes emerges winner.
At the end of the viral competition, Seun Oloketuyi, a media entrepreneur, got the most likes among other respondents. Last Thursday, Oloketuyi was presented with a prize of N100, 000 at the Ogba, Lagos, office of Abelinis Limited.
Speaking, Deji Orunkoyi, the General Manager of the company, said the campaign was initiated to join Lagos in celebrating its attainment of the golden jubilee. “Lagos is a land of dreams and as a company doing business here, we thought to give back in our own little way. We looked at all the line up of activities and came up with this idea to ensure that Lagosians across all local governments felt the joy of the landmark celebrations. In all, we toured 20 local governments and we are glad at the responses that we got,” Orunkoyi said.
The CEO of Abelinis, Abiodun Oshinibosi, added that the Spot N Post campaign was basically a corporate social responsibility initiative of the company. According to him, “Employing our own expertise and experience as an experiential company with a track record of successful activations, we bought the car, branded it and toured the state without seeking or getting any form of support from the state government. We are happy with the response and are further committed to contributing our quota to the development of our beloved Lagos State.”
Established in 2011 as a project management company with interests in events, activation and production, Abelinis Limited has entrenched a culture of philanthropy in the heart of its corporate social responsibilities. Last year, through one of its initiatives, the Fanz Championship Africa, the company constructed a new borehole in Amuwo Odofin Primary School, renovated the school’s abandoned toilet facilities and donated a generator to power the borehole. When it turned five in 2016, the management and staff of Abeinis visited the Area G Police Station, Ogba, Lagos, to donate food items and cheques to support the education of children of some deceased policemen. Prior to this, it had assisted with the payment of school fees for select undergraduates, donated Apple laptops to some identified creative youths, visited the Modupe Cole and Ijamido Orphanage Homes to support the less privileged while also presenting a phototherapy machine and top-of-the-range incubator to the Ifako General Hospital and Ijebu Ode General Hospital with a view to reducing Infant Mortality Rate (IMR). Earlier this year, during the company’s sixth anniversary, it empowered four widows of the police force with N50,000 cash and 50,000 worth of VTU each to start a retail vending spot. Indeed, for Oshinibosi, the best portion of a man’s life are his little, nameless, unremembered acts of kindness and love.