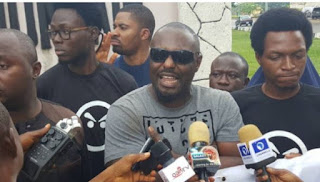 Controversial Nollywood actor Jim Iyke and Aisha Yusuf, the Bring Back Our Girls convener, have both joined the #ResumeOrResign and #OurMumuDonDo protest against President Buhari in Abuja which is now being staged for the third day.

Yesterday, the protest turned rowdy when policemen fired tear gas canisters at protesters, injuring one person in the process.

The wounded protester was immediately rushed to a clinic at the Federal Secretariat complex, for prompt medical attention even as the extent of injuries sustained by the victim was not ascertained immediately.

According to reports, the attempt by policemen to disrupt the gathering did not achieve its aim as the coalition members braved the assault by the cops and continued for an hour with their meeting.

Later on during the peaceful protest, foremost entertainer, Charles Oputa, widely known as Charlyboy, (the major leader in the protest against President Muhammadu Buhari’s long stay in London) was attacked with the butt of a gun by a policeman which made him slump.

The maverick entertainer and seven others protesters also reportedly had 30 dogs unleashed on them by the police.

Speaking after he was revived, Charlyboy said; “The rally was peaceful and it was meant to be a sit-out at the Unity Fountain in Abuja, but suddenly we saw a battalion of policemen who refused to allow us sit at the park, so we have to move to the opposite park.

“They were hostile and then suddenly unleashed the dogs which were coming voraciously to attack us. One of the dogs bit a fellow protester, before we knew it, they fired a hot-water canon which hit me at the back, and then started firing the tear gas at us. An overzealous policeman then hit me with the butt of his gun, I collapsed and my people have to carry me.”

The protest which is coordinated under the umbrella of a coalition of civil society groups, is holding both in Abuja and around the Abuja House in London simultaneously. 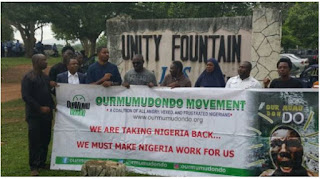