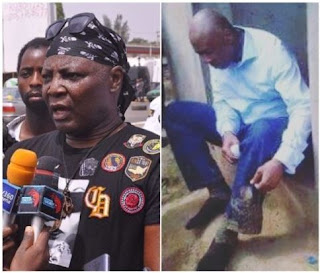 Ex-president of the Performing Musicians Association of Nigeria (PMAN) Charly Boy has tendered an unreserved apology to Senate President Bukola Saraki after he erroneously posted a picture of Saraki’s 2012 visit to Ogoniland claiming it was the picture of the senator being chased by youths in Kwara State.

However, a series of tweets by other users on the social media platform, including Saraki’s Head of New Media, Olu Onemola, calling Charly Boy’s attention to the fact that the picture he posted was taken during then-Senator Saraki’s oversight visit to Ogoniland, as the Chairman of the 7th Senate’s Committee on Environment and Ecology and not the picture of the senator being chased by youths in Kwara has forced him to eat his words.

The notification has forced Charly Boy, with the name @AreaFada1handle on twitter, to apologise to the politician, stating that he was in a hurry to post the picture on social media before verifying the veracity of the story.

“Apology to Senate President Saraki; my earlier post on Senate President Bukola Saraki was incorrect. I admit I was in a hurry to post before verifying the veracity of the story. I apologize for this avoidable error,” he wrote.

Immediately Charly Boy tendered his apology, Saraki replied through his Twitter handle @BukolaSaraki stating that he had accepted his act of contrition.

Saraki said: “Dear Charlyboy (@Areafada1), I appreciate your coming forward to admit that your post against me was ill-conceived. It takes a lot to do that. “I agree that we all see things from our respective lenses, but without disregard to what is permissible by an average mind. It is therefore imperative that we observe circumspection at all times so we don’t have to say the avoidable sorry.”

Charly Boy has not passed up the idea of lashing out on Nigerian politicians for their style of leadership in recent times.

Recall that barely a month after attacking Governor Rochas Okorocha of Imo State for the creation of Ministry of Happiness and Purpose Fulfilment; he took a swipe at Kogi State Governor Yahaya Bello.

In a video posted on Instagram, Charly Boy aka Area Fada called out the governor who was accused last year of owing civil servants a backlog of salaries including pensioners in the state for 21 months, telling him to adjust his style of leadership.
Posted by Unknown at 8:12 AM