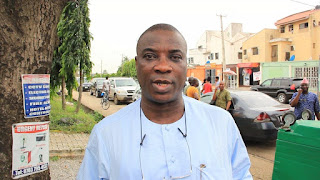 In a rare show of solidarity and camaraderie, Fuji icon, K-1 de Ultimate, in company with his crew, yesterday, Monday July 2, 2018, paid surprise visits to these two wave-making business concerns in Lagos.


First to be visited was the fast-excelling in patronage eatery, popularly known as OYO AMALA,owned by upwardly mobile and industrious businessman, Henry Alade, a.k.a Old School.

The proprietor of Oyo Amala joint was so elated at the arrival of K-1 and his crew at his joint, that he was grinning from ear to ear to ensure a good reception of his August visitors. As a mark of appreciation to the August visitors, Henry Alade treated K-1 and his crew to very sumptuous dishes, especially their most known and advertised delicacy, AMALA and assorted soups garnished with many condiments, which K-1 and his crew munched to their delight and satisfaction. 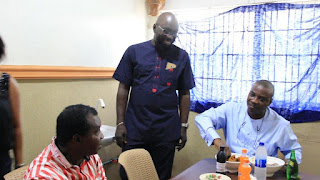 After the munching, K-1 took to the stand to offer incisive and encouraging prayers and admonition for Henry Alade and his team in the culinary business, calling on Almighty God to bless the business mightily by way of continued and soaring patronage of the business and God’s protection of the business environment, to which everyone in attendance shouted AMEN in unison.

The next port of call of K-1 and his team within the same Omole Estate was the exquisite and fully-stocked supermarket aptly dubbed OLD ENGLISH, owned by versatile and veteran society journalist, At Old English, K-1 and his crew randomly went round the neatly arranged items on display at the fast-expanding mall-like supermarket that has virtually everything in stock to readily qualify as a one-stop outlet for customers of any demand. 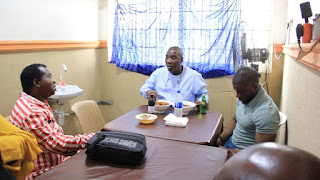 K-1 was so impressed at the innovativeness and business acumen of journalist-turned-entrepreneur, Lanre Alfred, that he just couldn’t stop commending and showering encomium on him for his (Lanre’s) ingenuity as an emerging big time player in the supermarket and groceries business.

Thus, in the same vein, like he did at Oyo Amala, he took ample time out to pray fervently for Lanre and his businesses, to continue to grow from strength to strength, adding that by the next time he would visit the outlet, there would have been a tremendous improvement in the stocks and patronage of Old English, which opened shop not quite a year ago and has gained so much ground in the neighbourhood and even from outside the estate. 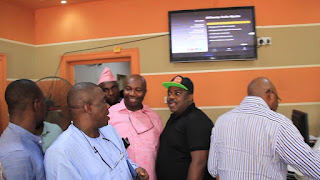 To show his appreciation to the Fuji Lord and his crew for the August visit, mercurial Lanre Alfred gave out sundry gift items on the shelves to K-1 and his team, all of whom were very thankful at the good gesture of the proprietor of Old English.

By these two unprecedented visits, the Fuji music impresario has just shown another side of him as someone who identifies with younger folks who are aspiring to break grounds in their respective areas of business endeavour; aside from being an astute business man himself, a colossal Fuji musician, and a big time player in the political arena, all of which have summed up to make him an enigma in the consciousness of many of his fans and admirers. 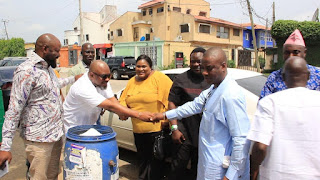 The Fuji king is billed to return to Canada in few days time, to complete another round of a deserved rest, which he had to cut short to visit Nigeria in order to attend his party, APC National Convention, in Abuja two weeks ago, and also held a closed door meeting with President Muhammadu Buhari on the state of the nation and the many squabbles in the party, being a chieftain of the party.