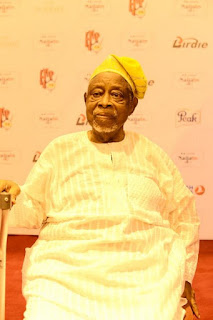 Honour came the way of veteran comic actor Moses Adejumo popularly known Baba Sala when he was honoured recently for his contribution towards the development of the comic nay entertainment industry in Nigeria.
The comedian whose health has raised concerns in recent times especially when he was taken to the University College Hospital, UCH, Ibadan, Oyo State, stepped out for the first time when he attended the Naija FM Comedy Jam Awards, where he was inducted into the Hall of Fame.
After the induction, an excited Baba Sala who is regarded as the father of modern Nigerian comedy thanked the organisers for deeming it fit to recognise him by inducting him into the Hall of Fame.
In the 60’s, Baba Sala alongside other dramatists like Hubert Ogunde, Kola Ogunmola, Oyin Adejobi and Duro Ladipo popularized theater and television acting in Nigeria. Significantly, Baba Sala started his career in show business as a Highlife musician, fronting in 1964 a group known as the Federal Rhythm Dandies where he tutored and guided the Juju music maestro King Sunny Ade who was his lead guitar player at the time.
Posted by Unknown at 9:16 AM