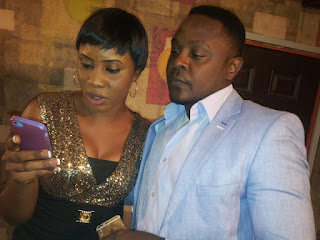 Watchers of rave soap opera Middlemen have continued to be thrilled by the edge-of-the seat suspense on offer especially with the fact that it offers a dynamic cast of young thespians.

Commenting on the growing acceptance of the series, Joseph Oamen, the Executive Producer of Middlemen says the series has gained appreciable followership due to its unique plot.

“Middlemen series has surprisingly gained tremendous followership which is due especially with the unique plot of the soap opera. We’ve been getting feedback from viewers who are happy about the storyline and the ever thickening plot of the soap opera.
“The entire cast and crew of the series are also glad, and giving thanks to fans for their commendation and they are also full of praise to the head of marketing IDL distillers, Mr Mobolaji Alalade, for seeing ensuring that TV series came to fruition by supporting it.” He added.
In his words, Bolaji Alalade, Head of Marketing, International Distillers Limited, who explained his companies involvement in the project series said; “We have decided to support this project because we have come to discover that soap operas are seen as a mode of relaxation for scores of families. The soap reaches out to people of all walks of life and it also cuts across all age strata. That reach cannot be overlooked and it is a veritable opportunity to showcase our products while families are entertained”.

The suspense filled soap opera sees Toju Aisha Peters (TAP) and Adeola Remilekun Coker decide to start their own advertising agency in a small apartment after both losing their jobs when they failed to land The Walnut Incorporated account.

They start the agency ARC & TAP right there in Adeola’s small apartment much to his girlfriend’s dismay and go through a series of clashing ideas, constant struggle to land accounts (big or small), making a mark in the industry and their never ending story of who actually is boss.

Every year Walnut Incorporation gives AD agencies a chance to pitch to them why they think they should handle their accounts and how they can move the brand forward. Toju and Adeola are determined to get that chance. They do. And the big question of who becomes boss comes to play.

The soap opera is being aired on various TV stations such as MITV, STV and satellite platforms like: DStv, Startimes, CONSAT and GOTV.