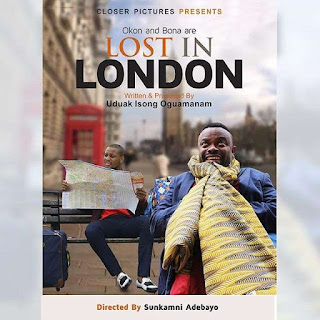 The new comedy movie ‘Lost in London’ is set to make its cinema debut on June 9, 2017. It stars Alex Ekubo as Bona, Ime Bishop Umoh who reprised his famous character, Okon, alongside Valerie Okeke, FunnyBone, Ella Betts, Kemi OlofinMakin, James Morgan and others.


The movie was written and produced by Uduak Isong Oguamanam and directed by Sunkamni Adebayo, both of who studied in England and are said to be using the film as a medium to showcase their rich Nigerian Heritage and British educational influence.
‘Lost in London’ continues the adventure of Okon. It is a hilarious tale about Okon and Bona, young students who get selected for an exchange program in London. They attempt to earn some precious Pounds before returning to Nigeria and experience culture shock and all sorts of trouble. But Okon and Bona are made of sterner stuff and every step of the way proves that the Nigerian spirit cannot be broken.
Lost in London is the third production in the successful Okon franchise - Okon Lagos and Okon Goes To School - the films that created the popular Okon character and brought Ime Bishop Umoh, who recently made headline news with his AMVCA win into limelight.
According to the producer, Uduak Isong, ‘this movie is the third of the Okon Franchise,   Okon first came to Lagos, then went to school, now he's gone to London. We have taken our franchise back. This third one although follows the usually hilarious tales of Okon, but it is different and much more hilarious and entertaining. The movie will be in cinemas from June 9th and I am confident that all cinema lovers will be entertained’

Watch trailer here: https://youtu.be/BppFTrs1cN4
Posted by Unknown at 6:52 AM