Why Indomie picked #BBNaija’s Miyonse as its new brand ambassador 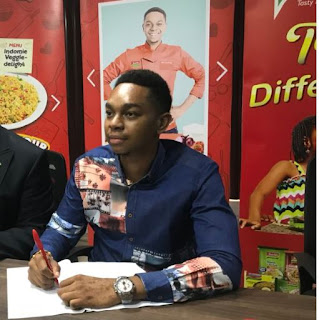 Reacting to the selection of Miyonse who hosts the cooking segment of the Wake Up Nigeria breakfast show on TVC Entertainment, Mr. Sharma said his personality fits the bill.
“We decided to collaborate with Miyonse because we recognize the fact that he is a well-respected chef and he knows his onions as far as the culinary landscape in Nigeria is concerned.
“He connects extremely well with his followers on social media; a quality which we recognise as vital considering the diverse consumer base for our brand, ranging from children to the youths and adults,” he added.
Moments after putting pen to paper on the deal which insiders say is worth his signature as it will see him enjoy loads of gifts including cartoons of Indomie Noodles in return for using his social media platforms to promote the brand, Miyonse took to Instagram to express his delight at the development.
He wrote; “Earlier today, the staff and management of Indomie Nigeria unveiled me to the public as their new ambassador.
“I am grateful to everyone who has continued to support me and believe in the Miyonse brand. Days like these testify to the popular saying that ‘a dream doesn’t become reality through magic; it takes sweat, determination and hard work.
The unveiling of Miyonse as the new brand ambassador of Indomie comes after rapper and songwriter Sound Sultan worked as a celebrity brand ambassador of the ‘You Like No Other’ campaign. 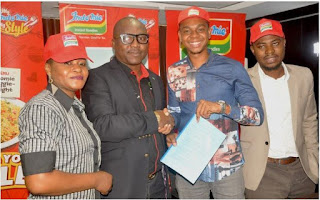